Today, President Serdar Berdimuhamedov proposed to organize direct negotiations on cooperation between the ports of Chabahar and Turkmenbashi at a meeting with the head of the Republic of India, Ram Nath Kovind, who is on a state visit to Ashgabat, the Turkmenistan electronic newspaper reports.

According to him, the transport sector is a promising area of ​​cooperation between Turkmenistan and India, which has a great future.

“Turkmenistan, as a country that provides, in fact, the only shortest route to the Persian Gulf, to the ports of Iran and from there to India, gives priority to this direction,” Serdar Berdimuhamedov said.

Chabahar, the second largest port in Iran, is considered one of the key elements of the North-South transport corridor and is considered by India, Iran and Afghanistan as a gateway for trade with the countries of Central Asia. In 2018, part of the Chabahar port was transferred to the operational management of India. 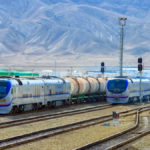 Turkmenistan-South Korea: transport cooperation is being strengthened
All Posts